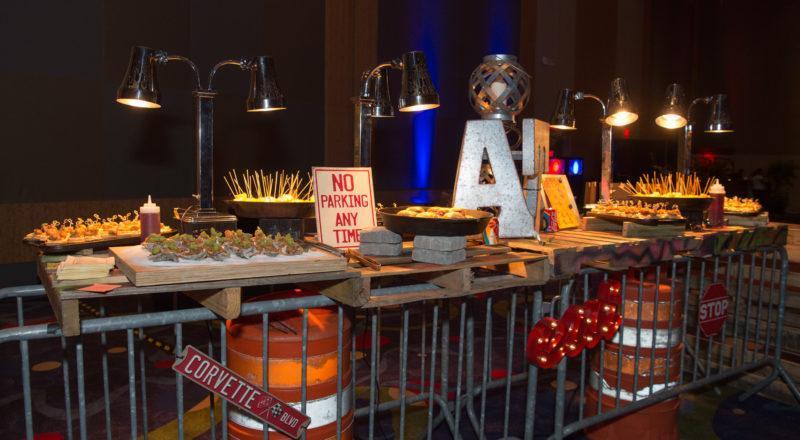 As the on-site caterer for a convention center, we don’t often have the opportunity to supply highly customized service on a relatively small scale. But for this BEST ON-PREMISE CATERING Allie Award winning event we were thrilled to transform a ballroom with brightly colored carpet into an urban street party that everyone enjoyed! Our blog today shares some of the details on how our team went above and beyond to enhance a ‘street party’ concept that made this an award-winning event.

The best way to discover a city is to get out on the streets, but if you can’t, we’ll bring the streets to you! At this urban street party, guests from around Georgia experienced the international side of Atlanta through colorful, exciting and fun street food served with a generous side of Atlanta hospitality. Proof was hired to provide catering design and service for this food-station reception. We also provided two specialty bars with bar service, and rental cocktail tables and chairs.

The event was a reception for guests attending the Georgia Governor’s Conference on Tourism, an annual conference held at the best hotels, resorts and conference centers around the state of Georgia – these guests were tourism and travel professionals from all over. They had already seen the best that our state had to offer but we were asked to WOW them even more. Now that was a job we could get our teeth into!

Our task was to provide food station design and execution with the theme of “urban street party,” featuring several different culinary traditions found in Atlanta. The event’s décor partner (Your Event Solution) would provide all other room and table décor, but nothing for the buffets. The event was held in the convention center ballroom, a huge room with high ceilings. We determined that décor on top of food tables would not be enough – we needed to build interesting stations from the ground up in order to fill the room, then design the menu for big impact in flavor, authenticity and above all in presentation.

Our team began with considering what kind of food was frequently found in the city, which would also be appropriate to this audience and party style. To celebrate this diversity and Atlanta’s southern heritage, we decided to offer four food directions: Atlanta/Southern, Mexican, Indian and Coastal, focusing on casual, street or festival-style preparations.

We created a big double-sided Mexican station out of two curved brushed metal tables. On one side, guests were served Barbacoa steak tacos with soft tortillas, and from the other side, sopes with beans, lettuce, tomato, cheese and guacamole. The taco is of course the quintessential street food, whereas the sope offered guests a less familiar treat. These were prepared in front of guests on huge griddles by cheerful staff in Mexican dress. The tables were covered by a 10’x10’ pop-up canopy as you might see at a festival, flanked by 8’ areca palms. To decorate the corners we stayed away from the stereotypical red, white and green, opting instead for draped scarves in festive pink, yellow, turquoise and lime green to coordinate with the bold carpet. We then extended this food station to the side with tall painters’ ladders, which served as shelving for mini paint cans filled with ceviche. Below and around the station were baskets and crates, some filled with popular Mexican ingredients such as corn, avocado, peppers and onions. The Indian station featured griddles piled with sesame shrimp skewers, Tandoori chicken, crispy potato and pea samosas with tamarind and mint chutney, and marinated paneer with peppers and onions. This station would stand directly in front of an interactive Twitter wall, so was to remain low and allow guests to see the screen behind. We designed it as a long one-sided food buffet to avoid impeding flow to the Twitter wall, on wheeled market carts. The carts were wooden table tops with a low lip around the edge, mounted on top of vintage wheel frames. Indian signage, lanterns, small wooden stools and fresh vegetables completed the look of this station. With a food type less often seen at industry events, this station was one of the most popular of the evening and our staff were kept busy constantly replenishing the platters.

It was important to us to create a visual and conceptual link to the unique entertainment of the evening – a BMX demonstration. Our décor partner secured and decorated the central stage/track with bike racks, so we decided to continue this theme into one of the food stations. The “Atlanta” food station lent itself best to this and we came up with a design to build the food station actually on bike racks. Two bike racks side by side, and another two parallel formed the “legs” of the 12’ food station, with wooden pallets secured on top as the table top. To prepare the pallets for use, these had been scrubbed and spray painted with graffiti. Beneath the station we placed two large construction cones which we illuminated from within. The food offered here was Southern comfort food served in taster sizes: chicken and waffle, fried oyster with Southern caviar and guacamole, short rib sliders and fresh roasted corn on a stick. These were presented on wooden planks and griddles raised on bricks and cinder blocks and the station was finished with auto-themed and vintage signage. Though Atlanta is not on the coast, Georgia’s rich coastal tradition has produced a long-standing culinary emphasis on seafood in Atlanta. At the Coastal station we served blue crab cake sliders with slaw and remoulade, shrimp po boys with lettuce and spicy aioli and housemade sweet potato chips. Wooden platters, lobster pots and lanterns gave the station a coastal feel without becoming overly decorated. The buffet was created on hostess trolleys of weathered wood under which we scattered Spanish moss. Further moss hung in tall ficus trees placed around the back of the station. The final station was over-the-top, and intentionally so. Our stainless steel rolling kitchen tables with overhead utensil-hangers were the ideal presentation for a decadent donut and churro stop, combining American and Mexican food traditions. Donuts hanging from the racks served as flavor inspiration for guests as well as eye-catching décor, and trays of the sticky treats below the station provided low-lying décor as well as reserve supplies for chefs. The sweet accoutrements were all the interest that the top of the table needed: to their pastries guests could add homemade vanilla bean ice cream, chocolate ganache or sea salted caramel and top with chocolate or rainbow sprinkles, shaved chocolate or mint sugar. We were happy to oblige requests for half or quarter portions so that guests could justify repeat visits to the hit station.