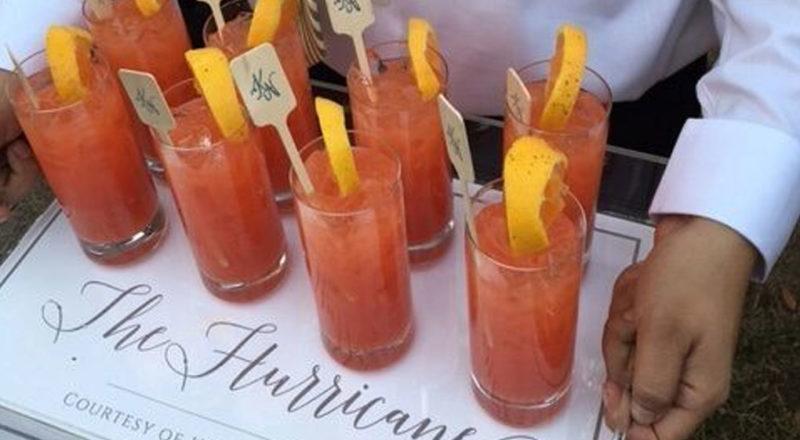 Out of this year’s four Allie Award wins, the one for BEST OFF-PREMISE CATERING was the closest to our heart. This wedding event was our company’s own ‘little girl’ getting married, and we were determined to give her the culinary sendoff she deserved! Enjoy today’s blog that shares some of the beautiful details, and hurricane sized challenges, that makes this an award-winning event at our partner location – Fripp Island.

While Proof of the Pudding‘s South Carolina branch catered other events during this destination wedding on Fripp Island, our corporate office in Atlanta provided menu design, presentation and service for the main evening food station reception. We also provided bar service, bringing in all 23 members of bar, kitchen and wait staff from our head office to service the event. Kate Thomson, our company’s own little girl, was getting married, and we were going to give her the culinary sendoff she deserved! The long drive wouldn’t keep us away…even a HURRICANE couldn’t thwart our efforts!

This wedding took place on a small barrier island known as Fripp Island along the Atlantic coast of the low country part of South Carolina, between Charleston and Savannah. One of the original partners of Proof of the Pudding has a second home on the island, so when his daughter, known to many of us as a child and now also a company employee, was looking for a wedding venue, the family home on the coast was an obvious choice. A five hour drive from Atlanta, it was also somewhat of a logistical challenge, but there was no question of anyone else providing catering. Around 300 family members and friends were invited, many staying for a weekend of activities. These included an oyster roast, golf tournament, breakfast and picnic. A wedding planner was hired to coordinate the weekend, and the smaller events were catered by our on-site resort division. The date of the main adult-only reception was set for October 22 and we set to work planning a fabulous menu! And then an unexpected guest showed up, Hurricane Matthew.

After wreaking chaos in the Caribbean, Hurricane Matthew traveled north along the coast of the Southeastern US, battering everything for miles around before making its fourth and final landfall in South Carolina on October 8. A state of emergency had been declared for the state and the island had been evacuated. The road was out, power was out, water was out, trees and homes were extensively damaged and wedding preparations took a distant back seat to saving lives and restoring a semblance of normality.

It was a full week before the bridge was rebuilt and residents were allowed back on the island to assess the damage. Our client had been relatively fortunate – the home had not sustained too much damage. Only the landscaping, just completed in time for the wedding, was unrecognizable. After much soul searching in light of much devastation in the area, the family decided to continue with the wedding, postponing it for three weeks. 230 of the guests were able to attend on the new date of November 12. The family spent much of October helping rebuild their community and repair their property. Since resources for miles around the coast were needed for more serious restoration, the family carried out many repairs and landscaping re-dos themselves. Back in Atlanta, we set to work reorganizing staff and transportation schedules around the new date, aware that with even less infrastructure than before we should expect to be completely self-sufficient. Now more than ever we were fully united. The day of the wedding was sunny, but as often on this exposed part of the coastline, extremely windy. Guests were greeted at the tent entrance by waiters offering trays of our surprise signature cocktail: Hurricane drinks. This was our little surprise to the bride and groom too, and it brought a smile to everyone’s face. We were battling the wind on our buffets and had changed plans for bar décor. The first part of the tent was used for the cocktail reception, and here guests nibbled at a deluxe charcuterie display of local meats, cheeses, Savannah honey, fig preserves, gourmet crackers and fruit garnish. These were presented on a lacy linen with a large lantern centerpiece provided by the florist. Other hors d’oeuvres were passed: our bride’s favorite fried chicken salad with candied pecans served in ice cream waffle cones; she-crab soup shooters with a corn fritter garnish; and vegetarian empanadas with peach salsa. At 6pm our head chef performed a showy sabering of the first bottle, and we passed champagne flutes for the toasts. Then the main food stations opened and guests made their way down into the main part of the tent. On both sides of the tent were chef-attended stations. At the first, a chef searing shrimp and Andouille sausage on a griddle. Next to it was a skillet of creamy Loganville gouda grits, and guests could create their own Low Country shrimp and grits with toppings of blue cheese crumbles, white cheddar, pepper and onion hash, fried onion straws and hot sauce. A second griddle offered a favorite of the groom: fried gator tacos with cornmeal crusted alligator meat, and French bread. At the food station opposite, chefs were busy plating small plates for guests to help themselves to. Short rib filets with caramelized Vidalia onion mash; herb roasted citrus chicken with sage cream sauce and roasted root vegetables; and a chafer of bubbling lemon goat cheese ravioli and artisan rolls. In the middle of the tent was the main grazing station. The focal point was a 6’ platform of flowers and lanterns suspended over the buffet with ship’s rope. Crab corn salad was served on oyster shells next to a harvest salad of Honey Crisp apples, candied walnuts, Georgia goat cheese, cornbread croutons and fig vinaigrette. A veggie garden display offered crudites of celery, red pepper, broccolini and baby orange and purple carrots in miniature jelly jars with a trio of dips – roasted pinenut hummus, pimento cheese and peppercorn ranch. On the other side were mini lobster po boys in a brioche bun, blackened mahi sliders and the center was filled with rows of bamboo cones holding housemade chips. The cake cutting was at 7 pm followed by the opening of the dessert station. Here guests enjoyed decadent bourbon pecan pie martinis with a brownie base and vanilla bean whipped cream; and macerated berries with mint garnish. Our chef’s famous assorted dessert bites and deluxe flavored coffees completed the meal. A barn wood dance floor was all guests needed to start dancing and then continue until long after the bride and groom had left in a tunnel of sparklers. A rough piece of plywood left outside in memorial bore the words “RIP Hurricane Matthew.” FEMA had had heavy machinery in the street that very morning still clearing trees. Power had only recently been restored. In recreating this wedding, a team of extremely hard workers on-site and on afar had managed the impossible. Family and guests were treated to a magnificent dinner inspired by coastal life, the bride was non-stop smiling and the coast would recover.